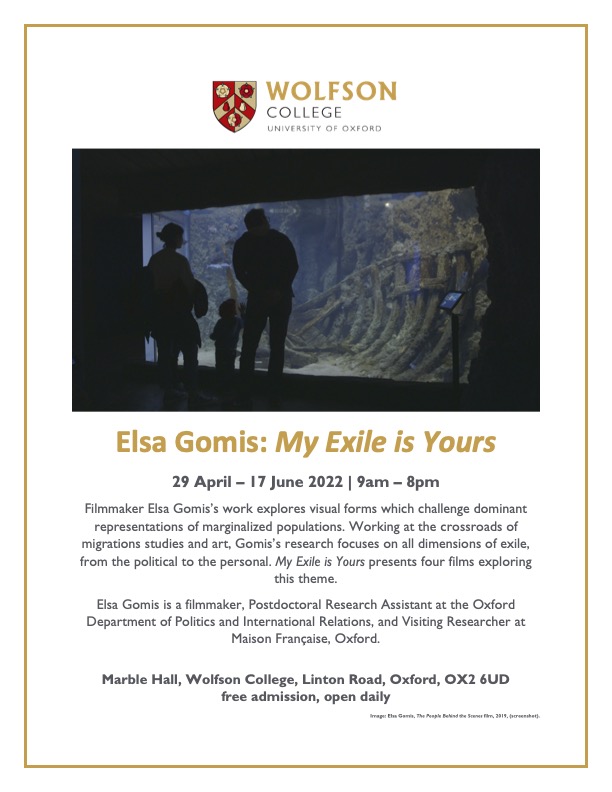 Next public presentation at: 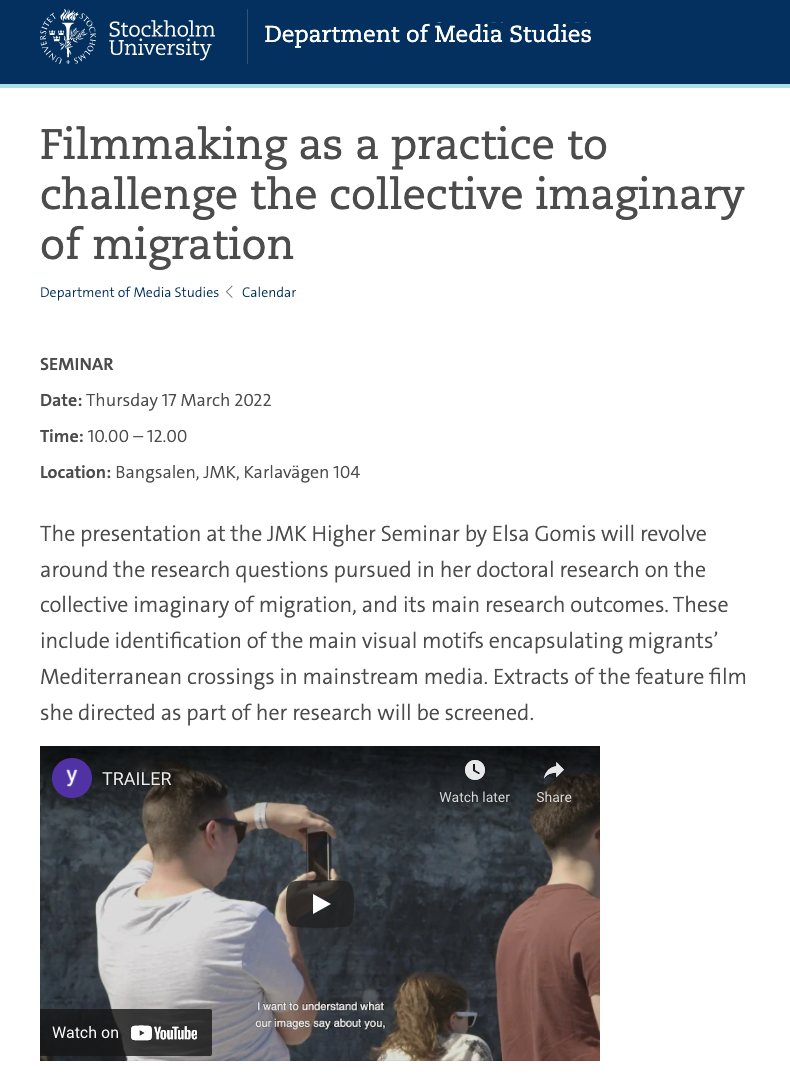 Next public presentation at:

By considering how (im)mobility is captured and expressed via several media–including film, photography, apps involving virtual reality, and data visualization–this event aims to foreground how beauty matters for public understandings, and what consequences this may have for societies, culture, and politics.

Why Visuals Matter for the Politics of Migration—Particularly Now 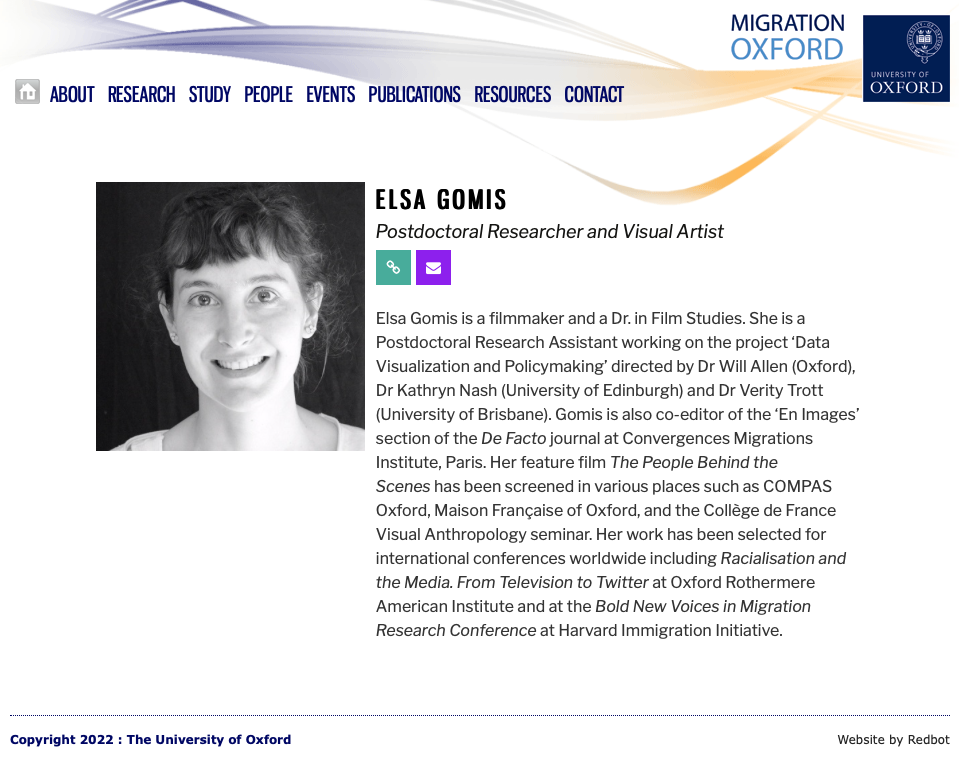 My doctoral project in Film Studies The People Behind the Scenes. Changing the Collective Imaginary of Migration in the Mediterranean passed with no corrections!

I feel blessed for having such a thrilling jury and supervisory team! 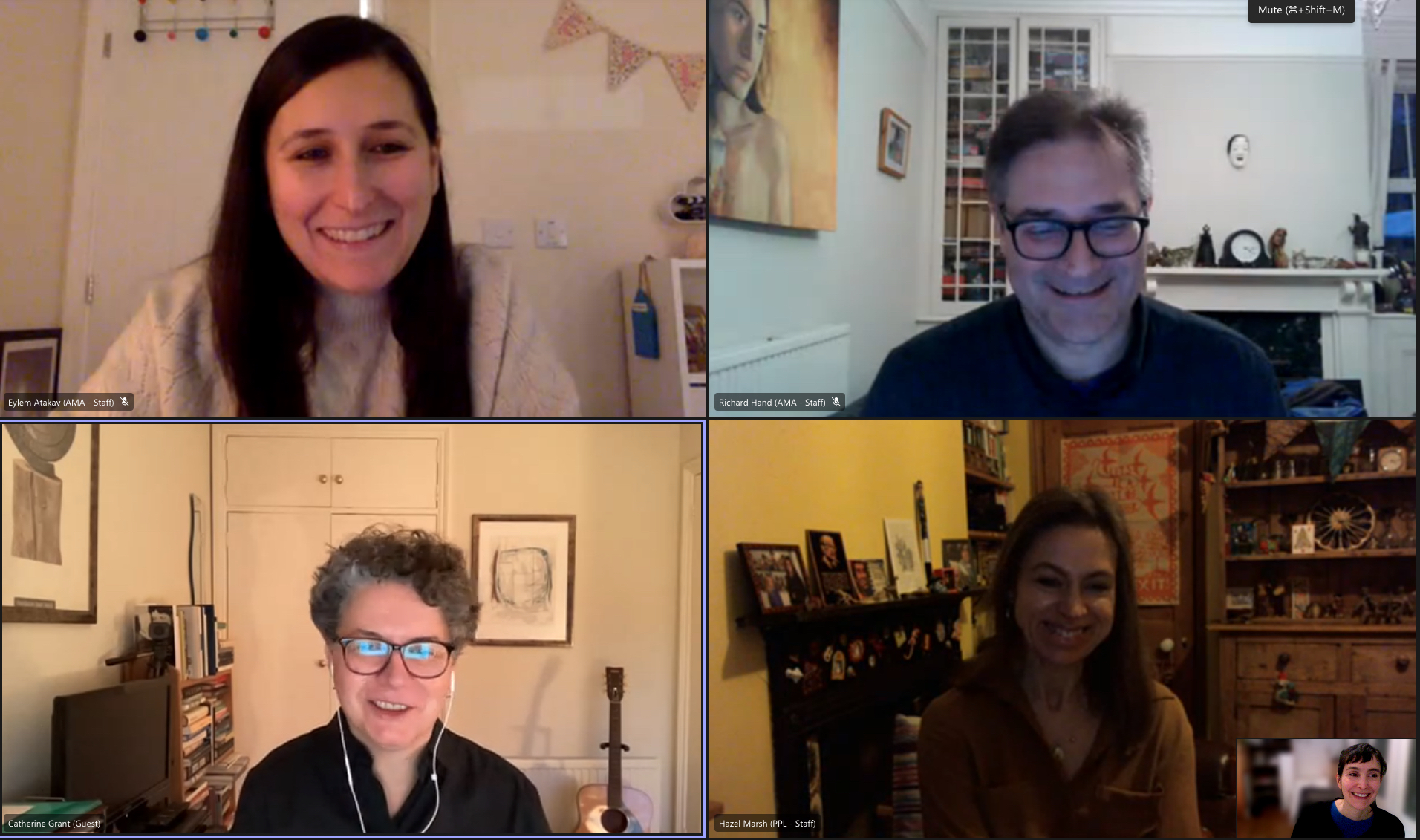 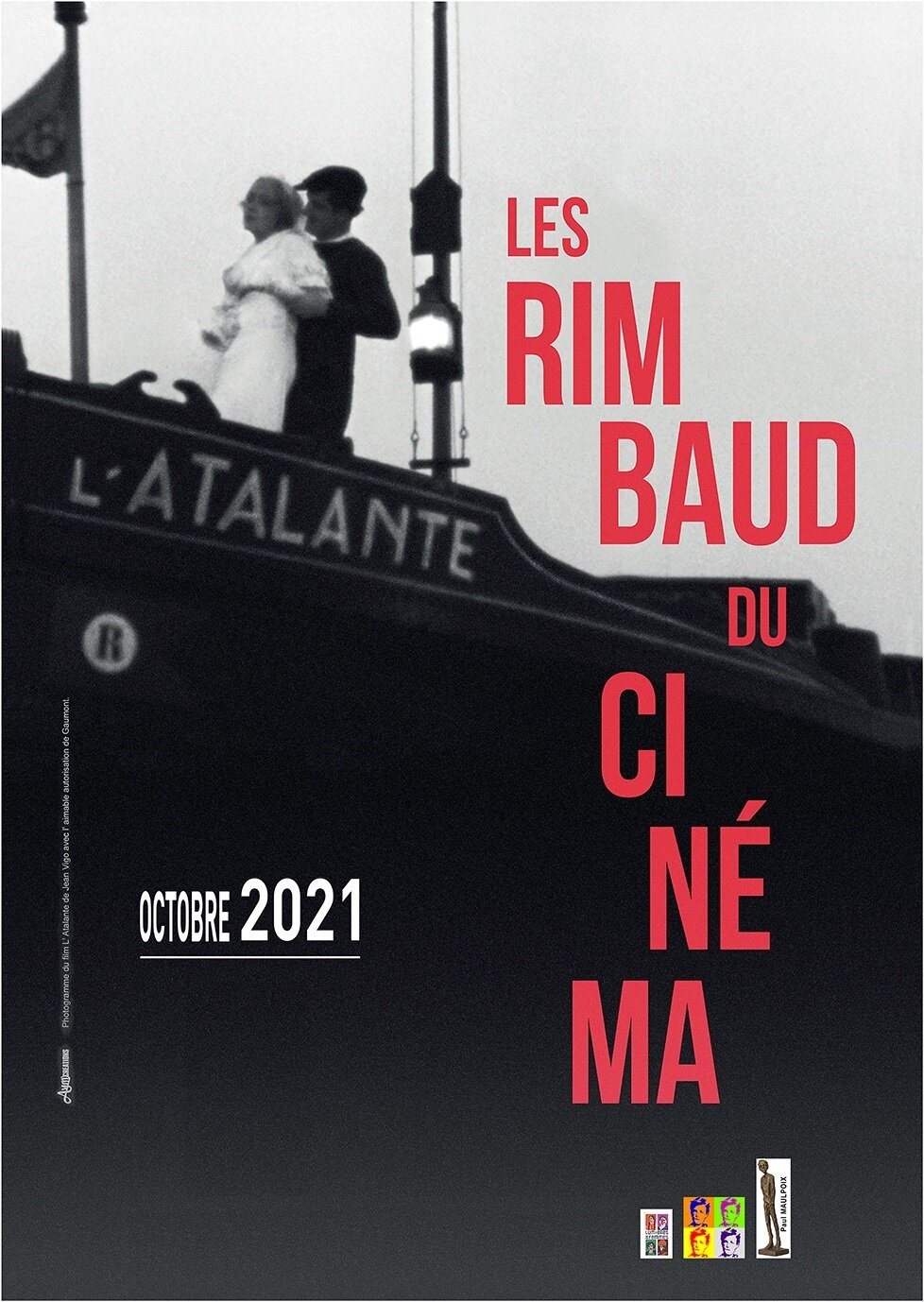 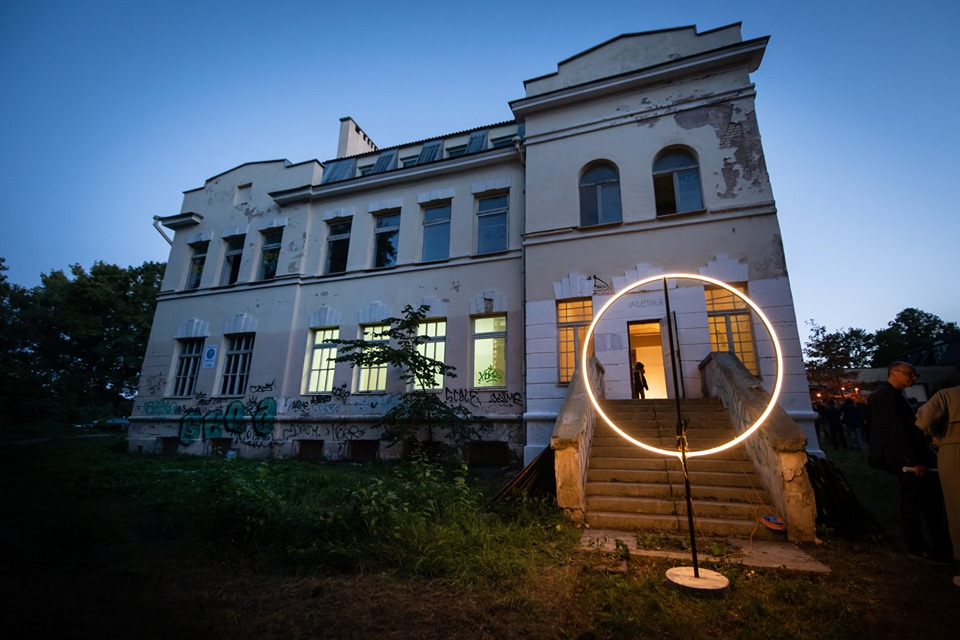 Between the magical and the sordid. Art as a funerary rite for missing migrants paper presentation at Thanatic Ethics. The Circulation of Bodies in Migratory Spaces Workshop 2
29 September – 1 October 2021
University Paul Valery Montpellier 3, The Education University of Hong Kong, Maison Française of Oxford 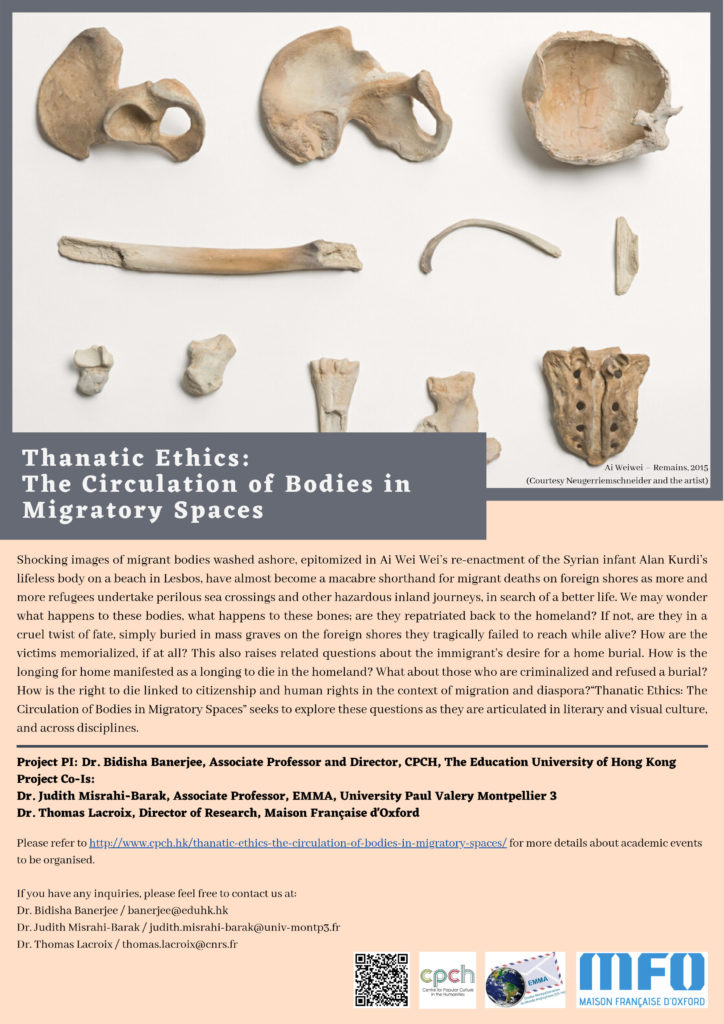 Live screening of What They Have Brought at Global Boderlands: Getting at the Core of Crimmigration Conference
18 September 2021
Oxford Border Criminology and CINETS University of Leiden 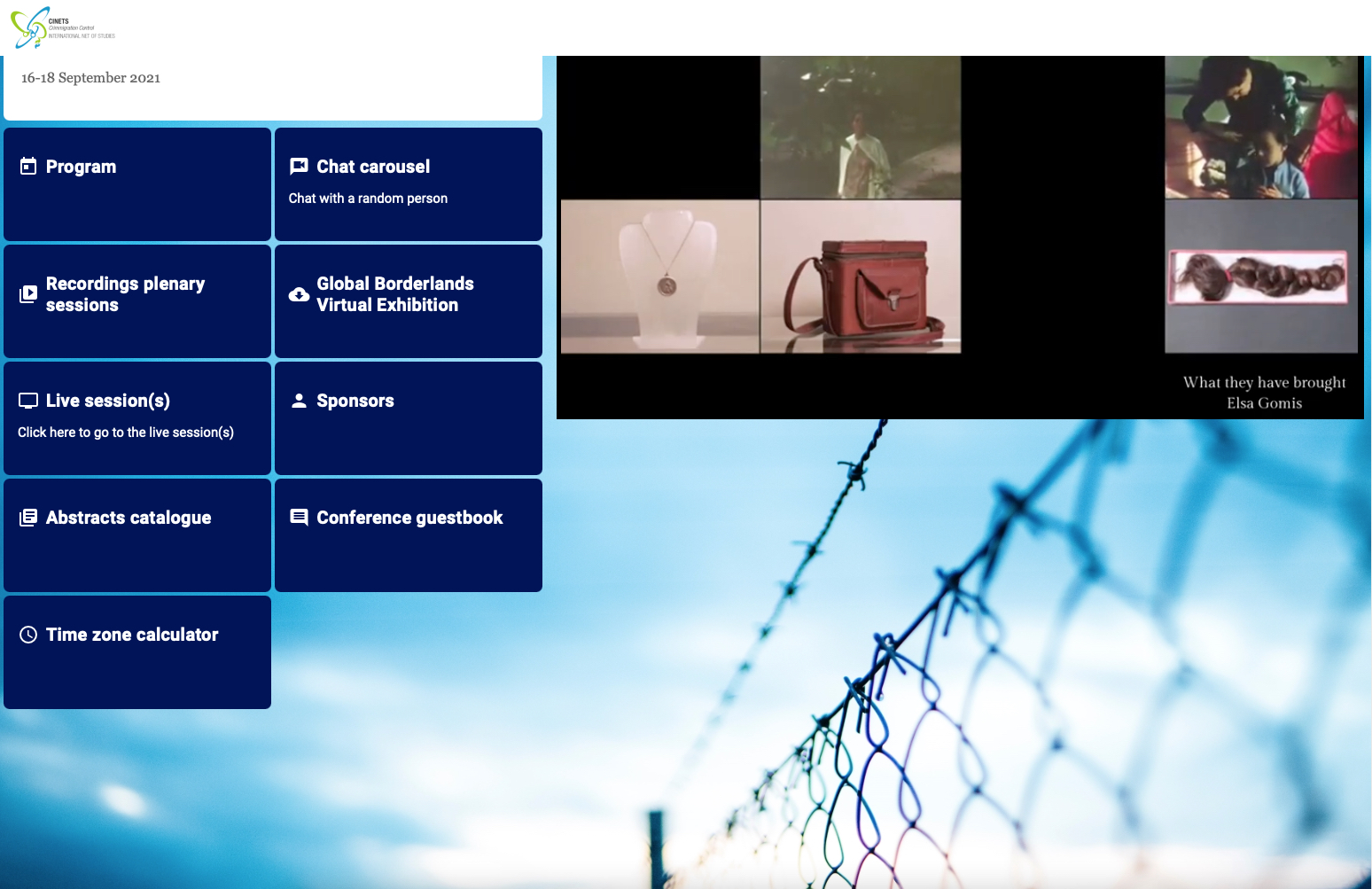 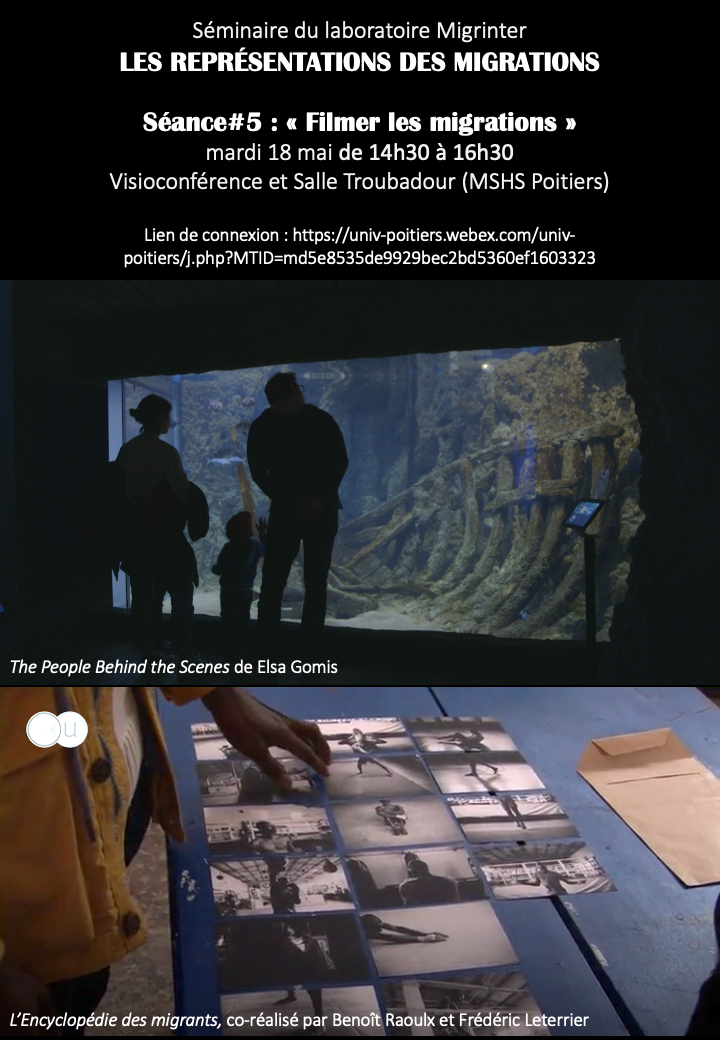 The People Behind the Scenes. The place of mainstream media images in the collective imaginary of migration, screening at The Rothermere American Institute, University of Oxford, 20-22 April 2021 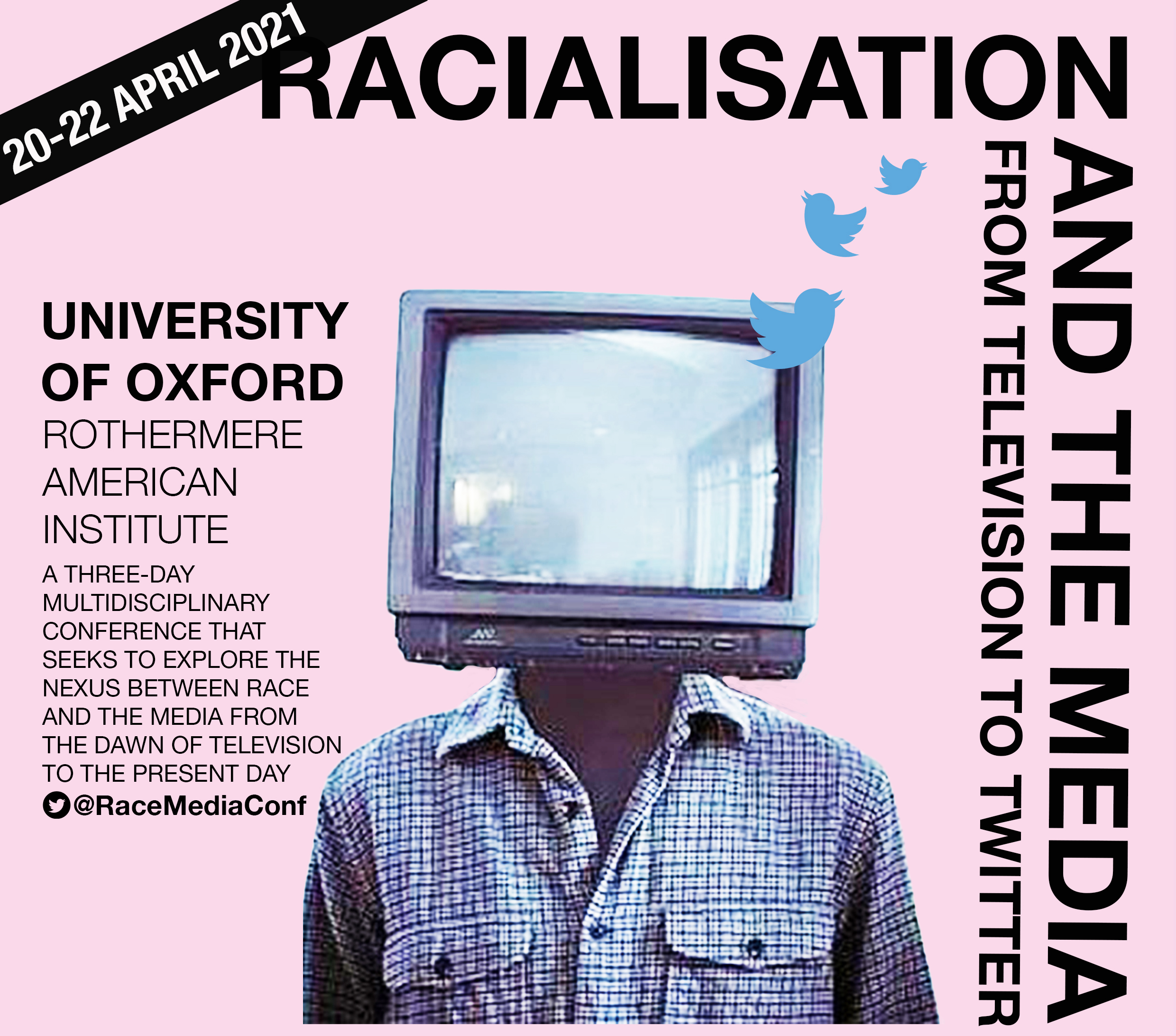 The People Behind the Scenes. The cognitive frame of cinema as a tool for migration research, paper presentation at Immigration Initiative at Harvard, 31st of March 2021

Cartographies of migration and mobility as levers of deferral policies, paper presentation at Oxford COMPAS for the 2021 IMISCOE Spring Conference, 22nd of March 2021 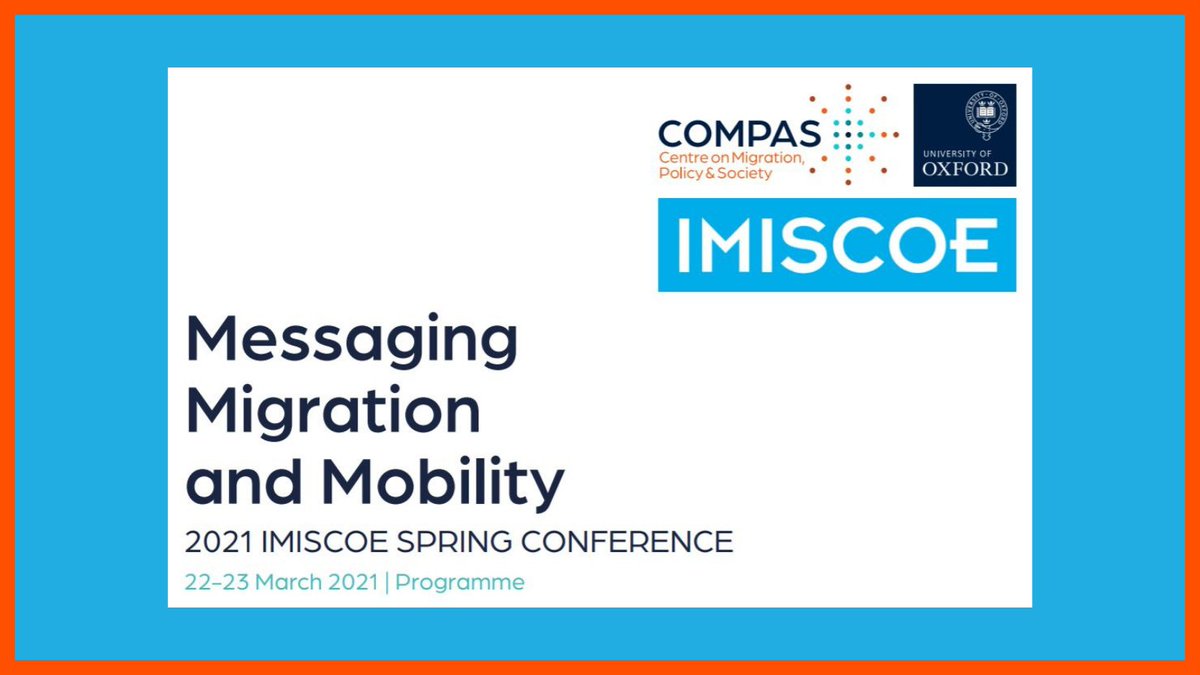 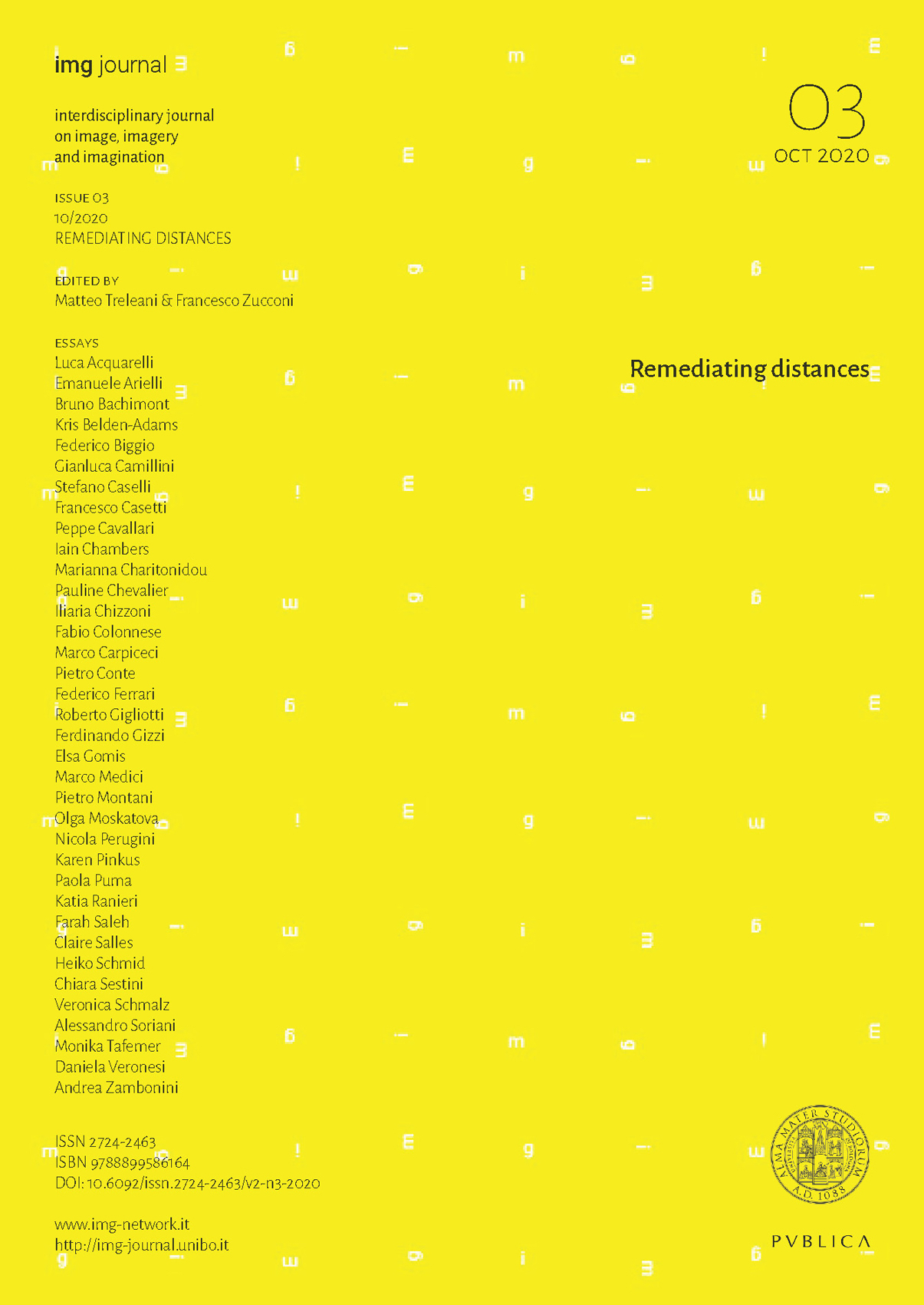 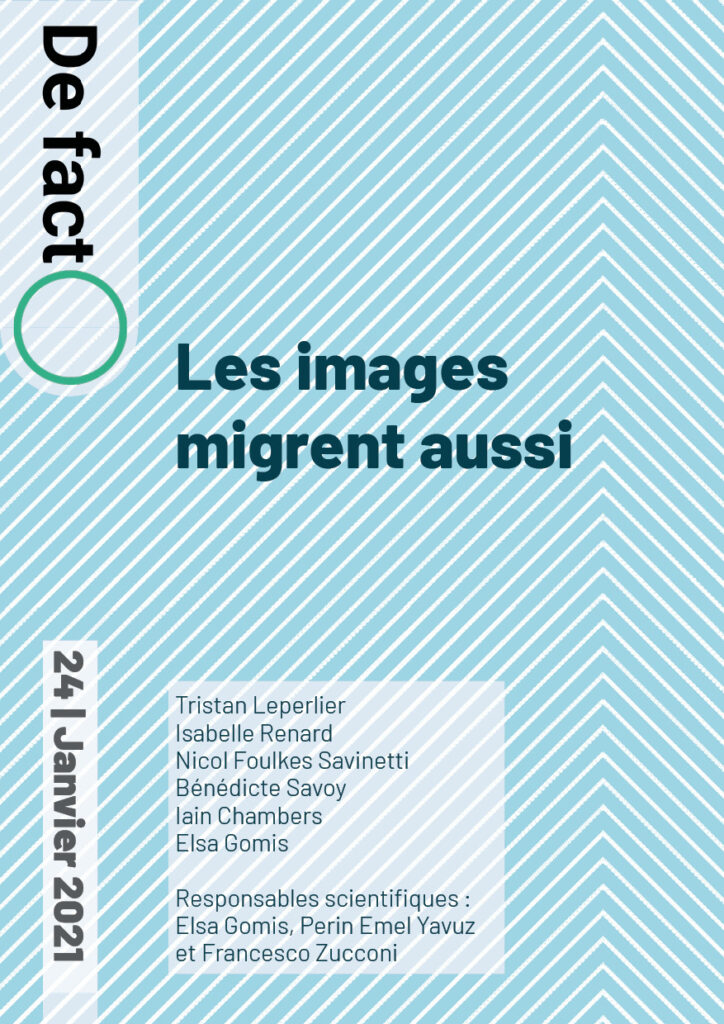 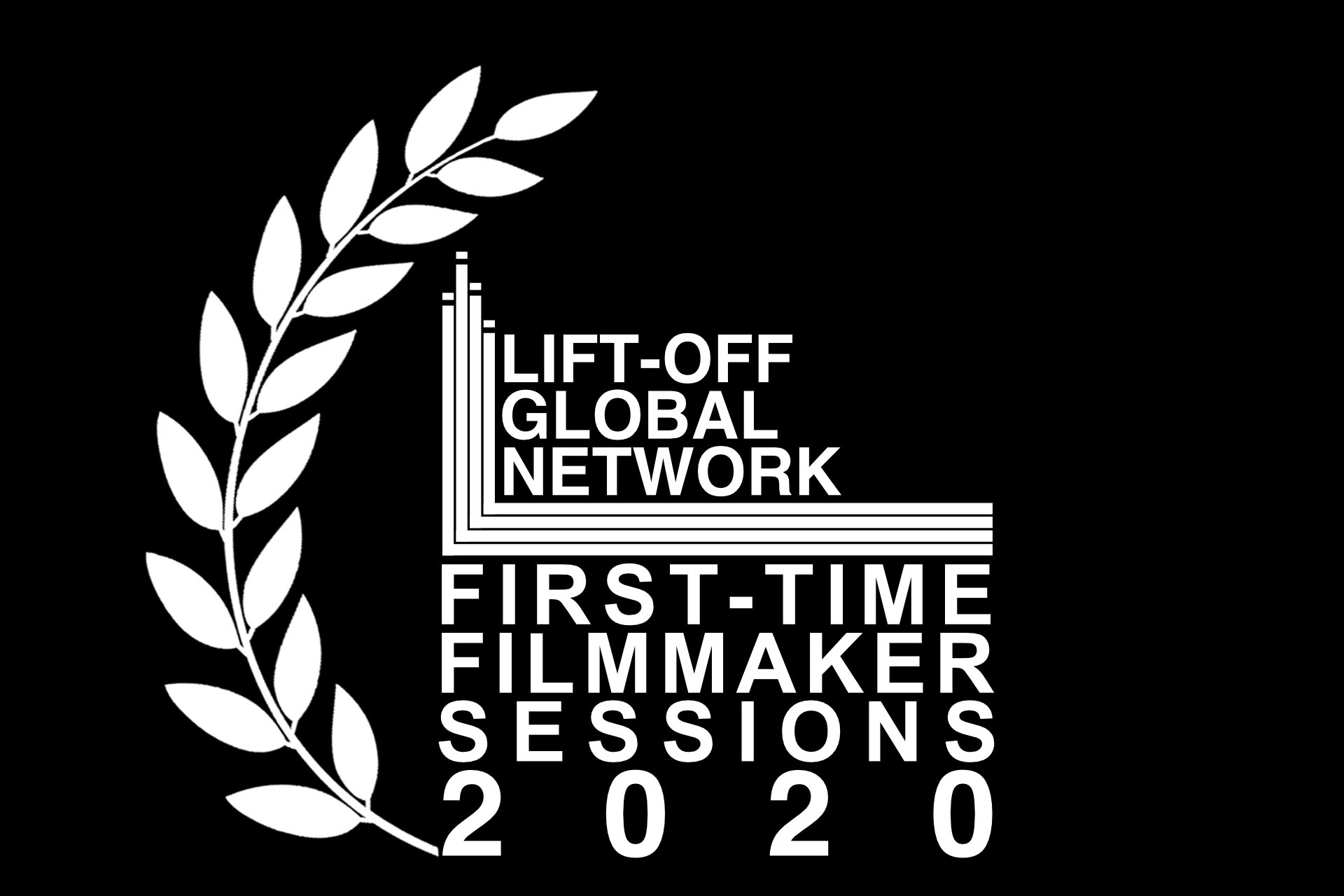 Video installation What They Have Brought on Routed Magazine‘s last issue ‘Immigrant legacies: The little things in the suitcase’

My paternal grandfather was the sweetest man. Orphaned by his mother, he was born in 1916 in Oran, Algeria, into a family of tailors. A brilliant student, he had obtained his school certificate with only one mistake on his dictation. He had forgotten an « r » in the word « carriole ». Yet, his father, who remarried two months after the death of my great grandmother could not afford to let him continue his studies. My grandfather had to join him at the workshop aged 13.

As a young man, he was sent to the front in Belgium. The Germans pushed his regiment back to the Vendée, where he was taken prisoner. With his comrades, he was transported in a livestock train designed to carry either 8 horses or 40 men. They were assembled in a first camp, in the football stadium of Dortmund, then settled in Stalag VIII in Silesia, along the Oder Neisse line, which is in present-day Poland. They spent 14 months there, in terrible conditions which his status as a tailor, made a little more bearable. At that time France had set up a network of « war godmothers », women of goodwill who were writing to soldiers prisoners who were missing a relative. My grandfather was writing to Josette Gourgeon who lived in Laval. Josette was involved in the Resistance. During one leave, she took my grandfather into the free zone with one of his comrades. Delighted to find themselves free, they met two gendarmes to whom they reported, before they understood that they were going to send them back to the Germans. They escaped again and managed to reach Algeria where they hid until the end of the war.

When Algeria gained independence in 1962, having nowhere else to go, my grandfather, who in the meantime was married and had two children, decided to follow his boss who, however, was paying him very badly. In the autumn of 1962, they were accommodated in an Électricité De France holiday camp in an old castle in which one room was allocated per family. In the summer of 1963, they found themselves in the large communal dormitories of a high school for young girls in Nancy. From Christmas 1962 to May 1963, they met in Montataire, near Creil in Oise. It was a social housing, in which each individual had a cell slightly larger than a single bed; the bathroom, kitchen, and dining room being common. He then had a Habitation à Loyer Modéré (another social housing) in Creil for two years, and on May 1st, 1965, for the first time in his life, my grandfather was housed in Aix-en-Provence, in a three-bedroom apartment with a bathroom. One of the rooms was called « the workshop ». It was there that he sewed with my grandmother, who was also a tailor.

I know this apartment, this is where he used to take me on his lap to tell me about the time of the Romans, ancient Egypt and the history with a capital H that had passed through his life. It is located in a building in a Priority Urbanization Zone, whose graffitied hall hall smelled like rat poison and whose thin walls could hardly hide noise of the neighbors.

Today, in the comfort of a pretty sunny Oxford house, I think of those who are confined to U.P.Z.s and who, as they say in the South, « se languissent » (are longing) to get out soon.

The photograph of this chestnut tree was taken by my grandfather Daniel from his workshop.

Images of Migration/COVID-19 newsfeeds In collaboration with IRD, the research centres MIGRINTER and CEPED and the Institut Convergence Migrations in Paris, and Maison Française of Oxford

Member of the organising team of the conference
May 24-27, 2021
Maynooth University, Ireland